John Steinberg spent many years in business before turning his hand to writing. “If you don’t at least attempt a change of careers then you can go through life not knowing what you might be capable of” says Steinberg. 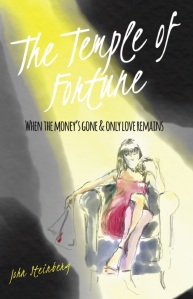 Stanley Rose has got it all – a lovely wife and daughter, a smart house in Hampstead and the good looks of Hollywood actor Omar Sharif. But good looks are no consolation when Stan’s business goes spectacularly bust and his wife Carol is about to lose her battle with cancer.

Neglecting his grieving teenage daughter, Stan buries himself in the pursuit of fortune and all its trappings. Family and friends are left to pick up the pieces while he props up the bar in exclusive clubs and decides what model Ferrari to buy next. A reckoning must come…

Nadine, the story of a stunning and mysterious French dancer set in London, Paris and New York. With its nod to Hitchcock’s Psycho in how soon his heroine comes to her own point of no return, John’s plotting is nowhere more daring than in Nadine.

Nadine is a poignant story of unrequited love, a love that will one day be returned and in a most unexpected way…

John’s second novel follows a  young German woman who moves to London from war-ravaged Berlin in 1956 to start a new life. She takes a new name, Charlotte Brown, and lands the job of her dreams at the National Gallery. But London is a city still rising from the ruins of the war, and Charlotte encounters ruthless individuals who are set on rising with it. “A kind of psychic trauma that regrettably won’t be quieted by anything so simple as dying one’s hair pink….” KCW Today, March 2017.

John’s first novel, where he recreated the bustling streets, glorious villas and fearsome gladiatorial arenas of the third-century Roman Empire. Read more about Shimon… “Shimon by John Steinberg is an imaginatively told tale of gladiatorial goings on in the Roman Empire of the third century, in which a Jewish hero faces a fearsome destiny in the arena.” The Jewish Chronicle, 3rd April 2015.

Born and raised in North London in 1952, John still lives in the city with his wife and three children. Privately educated, John left school after ‘A’ levels and completed a business diploma in what is now the University of Westminster, before entering banking.

He started training as an accountant but did not complete the course, choosing a position in his family’s furniture manufacturing business instead. John started his own mergers and acquisitions business in 1987, which he ran for almost 20 years before quitting to become a full time writer in 2007.

John has co-written and produced comedies for the stage and has created a series of books for children. “Previously, I had only been interested in comedy and finally started to write down the things I said or thought of. That led me to co-write and produce a play, In the Balance, and then W for Banker – which appeared at the New End Theatre, Hampstead. It was then I decided to quit the world of business in favour of writing full-time, and move toward more serious subjects. My first novel has taken two years to write and is the first in a series of books I am calling the ‘Steinberg Stories’.”

Processing…
Success! You're on the list.
Whoops! There was an error and we couldn't process your subscription. Please reload the page and try again.